We Hear You: Conservatives and Liberals, Thoughts and Prayers, God and Guns 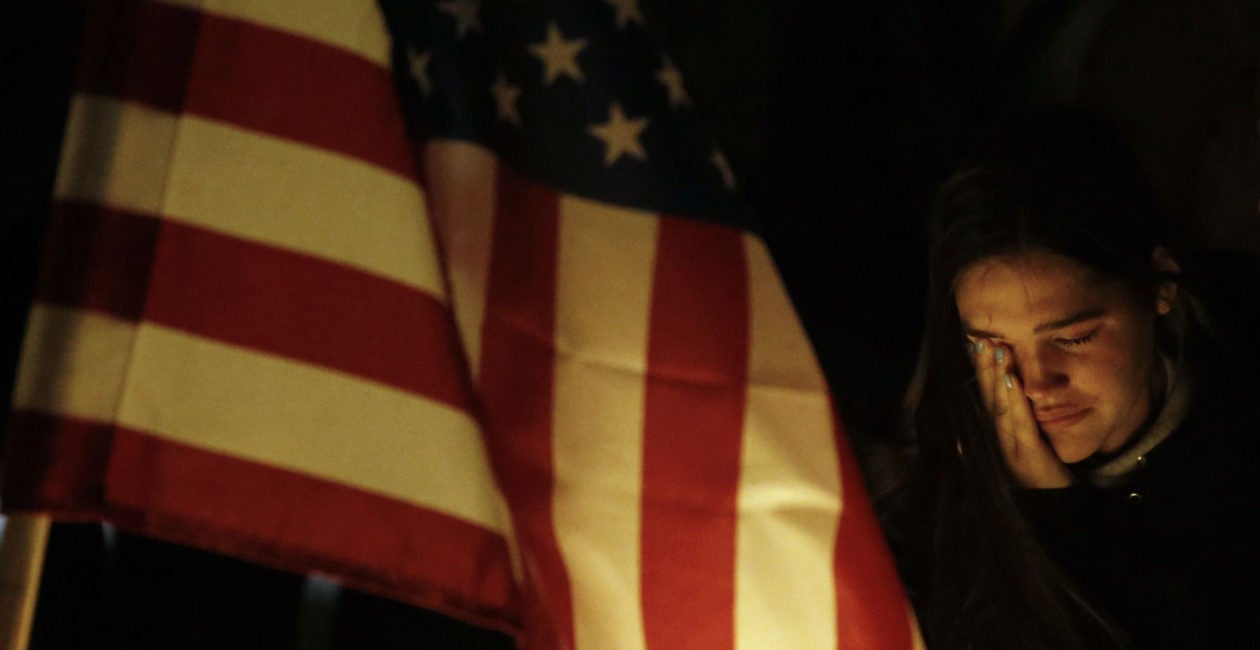 A woman mourns at a memorial event in Beijing, China, for the victims of the mass murder Nov. 7 in Thousand Oaks, California. (Photo: Li Ying/Chine Nouvelle/SIPA/Newscom)

Ken McIntyre, a 30-year veteran of national and local newspapers, serves as senior editor at The Daily Signal and The Heritage Foundation’s Marilyn and Fred Guardabassi Fellow in Media and Public Policy Studies. Send an email to Ken.

Editor’s note: Florida resident Andrea Falce’s email about the apparent prayer divide between conservatives and liberals stood out among recent missives. It leads this week’s selection from the mailbag. Be sure to write us at letters@dailysignal.com.—Ken McIntyre

Now,  A.J. Willingham of CNN, the mass murderer in Thousand Oaks, California, and liberals as a group have the same openly hateful take on “hopes and prayers.”

What is the fundamental divergence between liberals and conservatives?  Barack Obama coined it: God and guns.  I think our feelings about God are the quintessential point. Liberals reject God. They hate that the Founding Fathers guaranteed the right to have faith in God. Conservatives have the audacity to exercise those rights.

Lately it seems cathartic to mock, guilt, cajole, and punish Christians for loving God. The U.S. has a fundamental problem on its hands that goes way beyond guns. It is well explained when liberals try to bully and shame Christians for praying.

Conservatives tend to see people as the Founding Fathers did, with God-given rights to live and dedicate their lives as they see fit. Many of us shape our perspectives by a faith that includes death, judgment, and heaven or hell as real and inevitable parts of the future. For us, government exists to uphold basic law, order, and infrastructure.

Liberals want to live in a world where they are the gods and there is no life or law beyond themselves. They see government as a power source for reshaping reality. They want to deputize a new truth. A classic example is how it chaps the liberal that men were made men and women were made women. By government, they will legislate an alternative reality.

What is the real solution to the mass shooter problem? Maybe we ought to first ask the question: Why are these shootings happening? And be willing to answer truthfully. One thing is for sure, to have an honest conversation you need to tell the truth.

Sen. Cory Booker, D-N.J., explained the liberal understanding of truth during the Brett Kavanaugh hearings. He kept repeating that Christine Blasey Ford was telling “her truth.”

For Booker, and liberals overall, the truth is not something that exists independent of mankind’s will, to be discerned and appreciated. For them, truth is an object of convenience, manipulable in accord with expediency.

Right and wrong are simply relative to whatever serves liberal purposes in the moment. For conservative Christians, the truth is humanity’s to seek, discover, discern, and revere. It is set by God and impossible to remake.

No matter how liberals try to bend it or break it, we still keep searching and abiding by something beyond their dictations. They want all the power, and we can’t give it. Do they really want solutions to gun violence?  I am not sure. I know this: Liberals seek to gain more power after each heinous act.

For conservative Christians, prayer is one of the first steps in thoughtful, wise action. Liberals loath prayer in schools, sporting events, Democratic conventions, even during tragedies. The Thousand Oaks mass shooter had a sense of disgust toward prayer, too, and took the time to post about it on social media between murders.

This nation was founded on hopes and prayers. We already know liberals disdain the foundation of the United States and seek to redefine its principles. In the assault on prayer, they are telegraphing how much they disbelieve in God and disdain people of faith.

I keep praying because I believe a change in the hearts of men is the only real solution to gun violence or any violence—including abortion, the acceptable form of killing that involves drugs and sharp objects instead of bullets. There won’t be a quick solution to fixing sick souls.

Disarming those who would resist evil isn’t a solution, it’s a power grab. If the liberals are sick of “actionless” prayer in the face of tragedy, they don’t understand faith.

I for one am ready and willing to work truthfully for a solution to violence. While I wait for the liberals to show up, I am holding on to God and the right to bear arms. We need protection against senseless violence and haters who mock prayer and wish to destroy faith, foundations, and life.

I have faith that good will win in the end, even if not on human time. Until then, my hope, efforts, and prayers go out to the nation for peace, honesty, and healing.—Andrea Falce, Milton, Fla.