Editor’s note: What this story doesn’t tell you is that the FBI made the arrest as if they were taking down a terrorist or drug lord. Approximately 12 agents approached his home armed with rifles drawn. The lead agent banged on the door and shouted “FBI! Open the door! We have a warrant!” This was a totally unnecessary process done for show. Stone is 66 years old, has no history of violence or violent crime.  His alleged crimes are white collar — witness tampering, obstruction and false statements. –BL 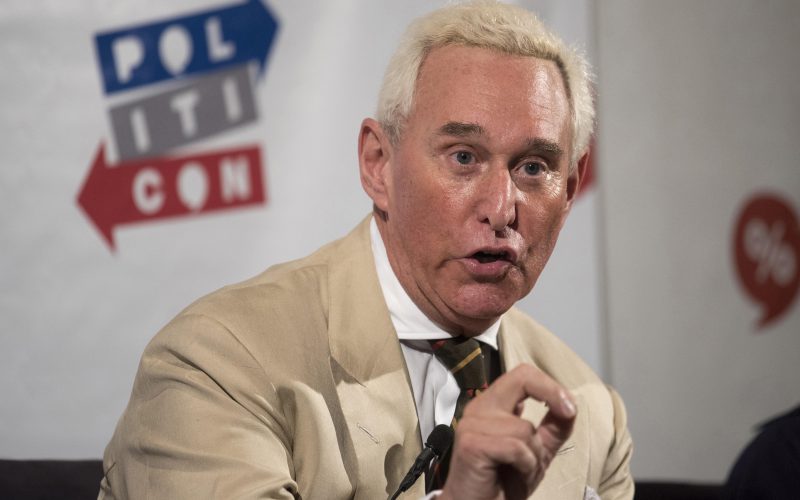 Exercise your right to vote

Stone, 66, was charged with one count of obstruction of an official proceeding, five counts of false statements and one count of witness tampering.

At the center of the charges are Stone’s communications involving WikiLeaks, which released internal Democratic Party emails that were hacked by Russian operatives during the 2016 campaign. According to prosecutors, Stone lied to the House Intelligence Committee about those communications and tried to persuade another person to provide false testimony.

The indictment from special counsel Robert S. Mueller III also said Stone had several contacts with unnamed people in the Trump campaign about WikiLeaks. After the organization released the first batch of hacked emails shortly before the Democratic National Convention, “a senior Trump campaign official was directed to contact Stone” about what else WikiLeaks might have, according to the indictment.

Stone allegedly sought information from WikiLeaks through an intermediary, Jerome Corsi, a far-right writer and conspiracy theorist, and then updated people connected to the Trump campaign.

“The payload is still coming,” Stone wrote to one supporter on Oct. 3, according to the indictment.

Unlike other people charged in the Russia investigation, Stone was not given a chance to turn himself in, and heavily armed federal agents arrested him at his home in Florida before sunrise. He is scheduled to make an initial court appearance in Fort Lauderdale, Fla., at 11 a.m. EST.

Mueller had focused on Stone in his effort to determine if any of Trump’s associates was connected to the theft and release of the internal Democratic Party emails. Stone sometimes suggested that he had inside knowledge about the WikiLeaks plans. But he adamantly denied any wrongdoing and downplayed his previous claims as empty hype. He also has said for months that he was prepared to be charged anyway.

The indictment marks a new phase of Stone’s storied political career, which began in scandal when he was a young volunteer for President Richard Nixon’s re-election campaign in 1972.

Among other deceptions, Stone admitted to embarrassing a Democratic candidate by donating to his campaign in the name of a socialist group. He later was questioned by the Senate committee probing the Watergate scandal.

Nixon’s resignation in disgrace, ending what his successor, President Gerald Ford, called “our long national nightmare,” did not chasten Stone.

He still sports a large tattoo of Nixon’s smiling face on his back. He also has cultivated a reputation as a bare-knuckle political operative willing to cross lines others would not, much like Trump’s late mentor, the disbarred lawyer Roy Cohn.

Stone met Trump while raising money for President Reagan’s campaign in 1980, and Stone eventually began encouraging the New York real estate developer to run for the White House himself.

Stone did not play a major role in Trump’s insurgent presidential campaign — whether he was fired or he quit is a matter of dispute — but he has said they stayed in regular touch.

During the presidential race, Stone drew attention by claiming he was in contact with Julian Assange, the WikiLeaks founder. He famously tweeted that Podesta would soon face his “time in the barrel” shortly before his hacked emails were released.

Stone has since tried to clarify those statements, insisting that he didn’t talk to Assange himself and that his tweet about Podesta was taken out of context. According to the special counsel’s office, he also tried to persuade an associate, Randy Credico, to provide false testimony to the House Intelligence Committee about their conversations involving WikiLeaks.

“Your lawyers should have told them you would assert your 5th Amendment rights if compelled to appear,” Stone allegedly wrote in a text message to Credico, a comedian and radio host who had interviewed Assange on his show.

Stone later suggested Credico commit suicide like a character in “The Godfather: Part II” to avoid testifying and told him he’s “a rat” and “a stoolie,” according to the indictment.

Stone has insisted he had nothing to do with any Russian schemes to release stolen emails or otherwise interfere in the U.S. election.

“There is still no evidence of Russian collusion, Wikileaks collaboration or evidence that I knew the source or content of the allegedly stolen or hacked emails published by Wikileaks,” he wrote in a column published by the Daily Caller, a conservative website, in November 2018. “Enough already.”

Two weeks later, Trump praised Stone for saying in a TV interview that he would never testify against the president.

“Nice to know that some people still have ‘guts!,’” Trump tweeted, clearly miffed that his former lawyer, Michael Cohen, had just told a federal court that Trump had directed him to pay hush money to two women in an illegal scheme to influence the election.

Including Stone, Mueller has charged 34 individuals and three companies since May 2017, when he began leading the probe into the Kremlin-backed effort to help Trump beat Clinton in the 2016 race.