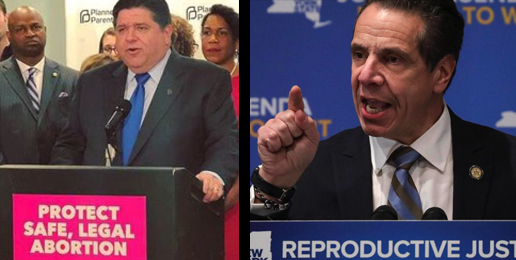 Illinois Gov. Pritzker All In for Taxpayer-Funding of Abortion and Planned Parenthood
Written by Laurie Higgins

Illinois’ newly installed governor, billionaire J.B. Pritzker, looked at the mess that decades of “progressive” rule has made of Illinois and had an epiphany: OMG, the problem here in Illinois is that it’s not progressive enough! That set him on a quest to out-“progressive” every “progressive” state in the union—well, at least regarding feticide. At a press conference pregnant with symbolism held at Chicago’s Planned Parenthood (PP) office on Tuesday, Pritzker issued this proclamation:

On the anniversary of Roe v. Wade, I’m proud to declare under my administration, the State of Illinois will be the most progressive state in the nation when it comes to guaranteeing the right to choose for every single woman…. And today, I’m proud to sign an executive order that will further protect…

Someone just arriving from Mars may wonder about the odd construction of those sentences. They might ask, “Right to choose what?” A translator would then explain that Pritzker was using a script written by the denizens of the Upside Down. For those who are unfamiliar, the Upside Down is “a dimension that is a dark reflection or echo of our world. It is a place of decay and death. A plane out of phase. A place of monsters. It is right next to you and you don’t even see it.” Those denizens are the monsters of Planned Parenthood, and the “choice” they and Pritzker avoid identifying is the choice to have one’s offspring offed.

Pritzker knew it would be challenging to follow in the colossal footsteps of that colossal failure Pinocchio Rauner who became the first governor in the country to mandate public-funding of abortion. Pritzker knew he had to do something BIGto capture the hearts and wallets of those who celebrate human slaughter and shout the killings of their children, like Amelia Bonow, seen here indoctrinating children in a lighthearted discussion of the absolute, unrestricted right to abortion: 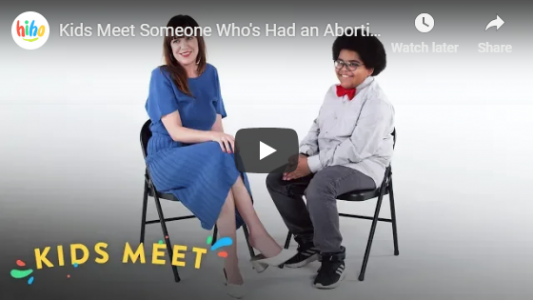 In the service of his morally disordered fan-base, Pritzker signed an executive order to ensure that all state insurance policies are quickly up to snuff in ensuring that women can snuff out their babies on the public dime.

Americans must disabuse themselves of the notions that killing humans is healthcare and that PP is deeply invested in providing mammograms. In an recent interview, PP president, Dr. Leana Wen, who absurdly claims there is “no more important organization than Planned Parenthood,” shared that,

The last thing I would want is people to get the impression that we are backing off of our core services…. What we will always be here to do is provide abortion access… it’s who we are.”

While everyone is aware of PP’s body-snatching-for-profit business, few remain aware that “Planned Parenthood is one of the largest sources in the US of transgender healthcare.” According to The Guardian,

[Planned Parenthood’s] centers use a newer model for gender transitioning that gives the patient input on whether to start their transition, rather than turning the decision over entirely to a psychiatrist. Some clinics have staff with detailed knowledge of how to update driver’s licenses, passports…

Perhaps that’s another reason for J.B. Pritzker’s personal and political investment in PP. Who can forget his first cousin James/”Jennifer” Pritzker. Since not everyone who wants to masquerade as the opposite sex is a billionaire, maybe J.B. thinks the public should pay for their chemically and surgically constructed flesh costumes as well. If he’s willing to use public money to destroy the tiny bodies of young humans, why not use public money to destroy the bodies of bigger, older humans?

New York Governor Andrew Cuomo also used the shameful occasion of the 46th anniversary of Roe v. Wade to sign into law a bill that guarantees the legal right of women to have their offspring killed in the womb without restrictions until 24 weeks of pregnancy and to have their offspring killed up until birth if the “health” of a woman is deemed at risk or the baby is “not viable.” Prior to the passage of this law, New York—which legalized abortion in 1970, three years prior to Roe—has had a law on the books that “defined homicide as ‘conduct which causes the death of a person or an unborn child with which a female has been pregnant for more than 24 weeks.’”

New York mothers now have a legal right to have their babies killed for virtually any reason one day prior to their  birth day. One day after birth, such a killing would be murder. Nowhere in America do we permit the non-voluntary killing of terminally ill humans, so we shouldn’t permit the non-voluntary killing of 40-week-old “non-viable” humans.

Alaska, Colorado, New Hampshire, New Jersey, New Mexico, Oregon, and Vermont have no restrictions on late-term abortions, and now New York joins the ranks of the 23 other states that permit abortions up until birth days if the non-defined “health” of the mother is deemed at risk by preventing the killing of her baby.

The product of conception between two humans is inarguably a human. Slowly, over decades, proponents of the legal right to kill humans in the womb have been forced to abandon their intellectually untenable early claim that the unborn were mere clumps of cells. Feticide-advocates now admit that humans in the womb are, indeed, human. What they say now is that, well, yes, it is a human but it’s not a person because essential to personhood are some abilities. One’s person-ness is constituted not by what one is but by what one can do. But if that’s the case, then the whole foundation for the Leftist “social justice” project is threatened. As philosophy professor  Francis Beckwith writes,

For if human ability (or achievement) is the sine qua non [i.e., something essential] of an individual’s right to life, then it is difficult to explain why we shouldn’t abandon the idea of human equality, since all our abilities come in degrees at every stage of human development.

If our moral status as persons with unalienable rights depends solely on our abilities—rather than on our existence as humans—then on what basis can we argue for the importance of equality in human affairs? To “progressives,” ability—a continually shifting phenomenon—precedes and determines personhood and, therefore, the rights conferred by personhood. According to the pro-abortion ideology, all humans are not equal. Equality based on humanness alone does not exist. I guess a panel of personhood judges is going to have to evaluate human worth and award those coveted and hard-to-earn rights. Woe to those who, once deemed persons, lose cognitive or physical abilities.